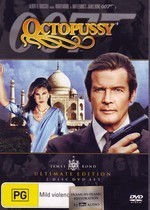 The bond must investigate the murder of a fellow agent who was clutching a priceless Faberge egg at the time of his death.

The trail leads to the mysterious Octopussy (Maud Adams), whose traveling circus features a company of luscious, athletic women. Bond and Octopussy share a passionate attraction, but soon 007 discovers that the elegant Kamal Khan (Louis Jourdan) is working with a mad Russian officer to hurl mankind into World War III!

As Bond tries to stop the nightmarish scheme, his exploits will include a riveting chase through the streets of India, a deadly brawl on top of a speeding train, and a breathtaking mid-air knife fight on an airplane wing.