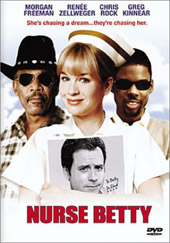 Unavailable
Sorry, this product is not currently available to order
A Kansas City waitress (Renee Zellweger) with dreams of becoming a nurse becomes delusional after seeing her no-good car salesman husband (Aaron Eckhart) murdered. Becoming delusional from shock, she becomes convinced that she is the former fiancee of her soap opera idol (Greg Kinnear). What she also believes is that the soap opera is real and goes to LA to find the hospital where he works as a cardiologist. Meanwhile, her husband's murderers (Morgan Freeman, Chris Rock) are searching for the drugs stolen by her husband and, as luck would have it, they are stored in the trunk of the car she drove off in. Freeman, an aging hitman planning his retirement after this job, also becomes delusional about the woman he is tracking. Special Features:
Release date NZ
February 7th, 2003
Movie Format
DVD Region
Edition
Aspect Ratio
Director
Neil LaBute
Language
English, Italian
Length (Minutes)
106
Stars
Studio
Universal Pictures
Subtitles
Enlgish, Italian
Supported Audio
Genre
Original Release Year
1999
UPC
0044007859926
Product ID
1462128