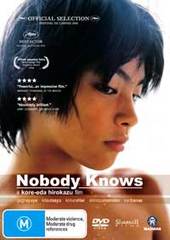 Hirokazu Kore-eda, the director of “Maborosi,” and “After-life,” presents this exceptional story of a makeshift family of children left to survive in an urban jungle.

Four siblings live happily with their mother in a small apartment in Tokyo. The children all have different fathers. They have never been to school. The very existence of three of them has been hidden from the landlord. One day, the mother leaves behind a little money and a note asking her 12-year-old boy to look after his younger siblings. And so begins the children’s odyssey, a journey nobody knows.

Despite their mother's aban­donment, the four children do their best to survive in their own little world, devising and following their own set of rules. But when they have no choice but to engage with the world outside the apartment, the fragile balance that has sustained them collapses.

Kore-eda incorporated documentary techniques to make this film extraordinarily intimate and unaffected. Filmed chronologically over a year, “Nobody Knows” captures the young amateur actors growing as their characters do, highlighting the details of the children’s lives, whether the nuances of a manicure, a toy piano, squeaking sandals, a cup of instant noodles, or a box of chocolates, to evoke not only the distinctive world of these particular abandoned children, but the gentleness and beauty of every childhood.