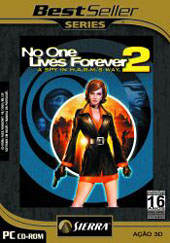 This game, in all its fabulousness, is pretty much the only game I'll play, and am capable of playing. The story is good, the graphics are amazing, and the entire thing is just fantastic from start to finish. With less locations than the first one (which had sky diving whilst shooting and swimming with sharks) this one still manages to outdo it, with its new “search” keys and characters. There are also a lot of hilarious lines in this one, which is rare for a shoot 'em up these days. The weapons are high tech and easy to use, the assassins are easy (ish. Afterall, I did play on the easy level) to kill and the whole thing is just coated in glamour from the sixties cold war theme. However, don't let that put all you hardcore shooting fans off, because there is ALOT of shooting, too, and lot of blood (however, as usual, the amount is customizable in the menu). Last but not least, you'll probably be the only one playing this one (I now I was) in your circle of friends, but if you ever get lonely whilst ninja-shooting (1st level) there are multiplayer functions and a really nice group of people playing it online (since I was so shocking at multiplayer, they'd apologise for shooting me, which took the sting off being out of their league). Plus, with the price? Who can resist? So, do try it, because I think you'll be writing more accolades about it in a month at most.

This game is a bit of a sleeper – it doesn't look like much but it's actually a very good first-person game. There is more than one way of getting through the various levels usually and it has a rather amusing storyline with some great cut-scenes and funny dialogue. The graphics while a little dated compared with current gen games are still pretty good given it's age, but it will still run very nicely on an older rig.

It's easy to overlook this game but at this price it's a real bargain – take a punt, you'll be surprised at how good it is. Fun, funny and well worth playing.

1 out of 1 people found this review helpful.
H.A.R.M. is back with only one obstacle to thwart their quest for domination: Cate Archer, the beautiful but deadly UNITY operative who foiled their last nefarious plot. The world's most deadly assassins are summoned with one simple objective: kill Cate Archer.

Meanwhile, the United States has uncovered a top secret Soviet project that, if successful, could bring about a third World War. Can Cate Archer avert a nuclear holocaust and simultaneously stay out of H.A.R.M.'s way?