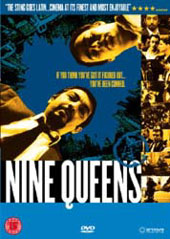 Due to COVID-19, we're unable to accept orders for non-essentials items at this time. Learn more...
When money gets tight and times get tough, a veteran con man and a rookie hustler team up for a day of clever schemes and small time cons. As they work the streets for pocket change they find a one in a million chance at wealth in a counterfeit set of extremely valuable stamps known as the "Nine Queens".

With a buyer in place, what once seemed to be an easy opportunity for big money gets turned upside down as millionaires, hustlers and thieves compete in the swindle of a lifetime. Who's playing who in the underground world of con artists and street hustlers where deception is survival?

Nine Queens joins a line of sly thrillers about master-pupil con artists and games within games within games that includes The Sting, House of Games, and Heist. In the first five minutes, we watch an overt scam--a young Argentinian named Juan (Gastón Pauls) running the two-10s-for-a-5 hornswoggle on a convenience store clerk--then find that we have been tricked along with the bystanders as another brand of deception kicks in. And so it goes as Juan, with both trepidation and excitement, drifts into partnership for a day with an older, more cosmopolitan conman, Marcos (Ricardo Darín). Knocking around Buenos Aires--from gritty downtown to cozy neighborhood side streets to a swank hotel where wealth murmurs behind every door--these damnably resourceful scoundrels try not to miss a bet, including an epic swindle involving the titular "Nine Queens," a set of ultrarare stamps. Writer-director Fabián Bielinsky keeps a taut rein on everything, including his own cleverness. The end result is an entertainment as bracingly disciplined as it is ingenious. --Richard T. Jameson
Release date NZ
January 1st, 2007
Movie Format
DVD Region
Edition
Aspect Ratio
Director
Fabian Bielinsky
Language
Spanish
Length (Minutes)
114
Stars
Studio
Madman
Subtitles
English
Supported Audio
Genre
Original Release Year
2000
UPC
9322225010338
Product ID
1463066