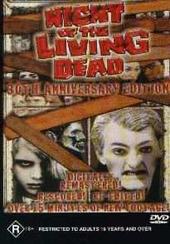 30 years ago in the quiet Pennsylvania countryside, the dead began to walk. Fueled by an insatiable hunger for living human flesh, the ghouls ghastly quest inadvertently brought together six strangers whose inability to unite would ultimately lead to their tragic downfall. To celebrate its 30th anniversary, the cult classic Night Of The Living Dead had been expanded and enhanced to bring you the best visual and audio version ever available. So turn out the lights, board up the widows and get ready for an all new experience with the definitive horror film of all time.

Comments: 30th Anniversary Edition (with new footage). Item is in like new condition.