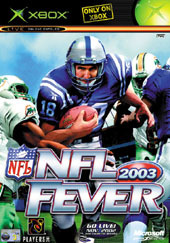 Due to COVID-19, we're unable to accept orders for non-essentials items at this time. Learn more...
NFL Fever combines fast and hard-hitting action with deep season and career modes. Designed exclusively for Xbox, NFL Fever 2002 features stadiums from all 31 NFL teams and enables gamers to participate in up to 25 seasons. Players can amass both individual and team trophies and build their own dynasties, season after season. The fast-playing NFL tempo lets gamers explode through the holes and break loose, just like real NFL players.