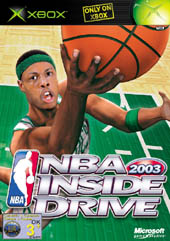 Due to COVID-19, we're unable to accept orders for non-essentials items at this time. Learn more...
Following a strong debut on Xbox and a successful history on the personal computer, this newest addition to the “NBA Inside Drive” franchise features several new customization and gameplay enhancements. In “NBA Inside Drive 2003,” developed by High Voltage Software Inc., gamers will continue to enjoy team-specific playbooks and tendencies, superior graphics and fluid gameplay.