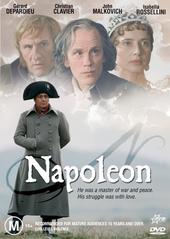 For the first time ever, Napoleon the man and legend is depicted on screen in all of his facets: as a man of human needs and desires, strengths and weaknesses; as a soldier, politician and visionary who raised himself above his fellow mortals and transformed himself into a myth.

Napoleon is shown dealing with and manipulating power; loving, seducing and not infrequently betraying the women in his life; interacting with his tight-knit, highly demanding Corsican family; inspiring his armies to achieve the First Empire's most glorious conquests.

"Napoleon" sweeps away the pathos of previous portrayals and presents its subject in all of his complexity and contradictions. It provokes questions and challenges common assumptions. It paints a portrait of Napoleon that respects the facts and depicts him as a man whose life can still move and inspire all of us today.

This 4 part mini-series won the 2003 EMMY AWARD for outstanding costumes, along with 6 further nominations