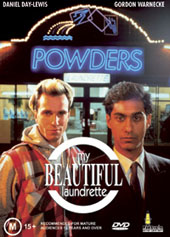 MY BEAUTIFUL LAUNDRETTE is a highly acclaimed and beautifully rendered portrait of two boyhood friends struggling to survive in racially tense Thatcher-era Britain. Omar, a homosexual Pakistani boy living in London with his alcoholic father, lifts a chunk of drug money from another Pakistani and, with his school chum Johnny, decides to renovate a grungy laundrette. Featuring seething dialogue and visually stunning camera work, the film explores the world of modern Pakistanis trapped between two cultures in Thatcher's Britain and their white working class counterparts with no future in their own country.

Directed by renowned English filmmaker Stephen Frears (DIRTY PRETTY THINGS), written by Hanif Kureishi and featuring a star-making performance from a then-virtually unknown Daniel Day-Lewis, MY BEAUTIFUL LAUNDRETTE stands as one of the best British films of the 1980s.