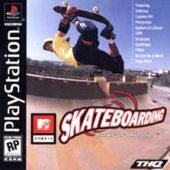 Unavailable
Sorry, this product is not currently available to order
MTV Sports: Skateboarding featuring Andy Macdonald, THQ’s latest instalment within the action sports genre, is one of the most advanced skateboarding games ever. Choose to board as one of 30 skaters-- both professional and fantasy-- including vert phenomenon Andy Macdonald, and then try your best to skate into the top rankings.