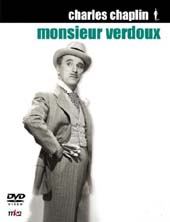 Due to COVID-19, we're unable to accept orders for non-essentials items at this time. Learn more...
This blistering little black comedy was well ahead of its time when released in 1947. Originally, Orson Welles had wanted Chaplin to star in his drama about a French mass murderer named Landru, but Chaplin was hesitant to act for another director and used the idea himself. He plays a dapper gent named Henri Verdoux (who assumes a number of identities), a civilised monster who marries wealthy women, then murders them (as we meet him, he's gathering roses as an incinerator ominously bellows smoke in the background) and collects their money to support his real family. The Little Tramp is now a distant memory, though this was the first film not to feature Chaplin's beloved creation. Verdoux is largely viciously clever. Ultimately, Chaplin breaks character (much as he did in The Great Dictator) to preach to the masses, declaring that against the machines of war that grip the planet, humble killer Verdoux is "an amateur by comparison."
Release date NZ
March 24th, 2004
Movie Format
DVD Region
Edition
Director
Charlie Chaplin
Language
English
Length (Minutes)
124
Stars
Studio
Warner Bros.
Supported Audio
Genre
Original Release Year
1947
UPC
9325336017654
Product ID
1462284