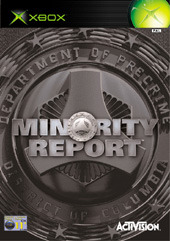 Due to COVID-19, we're unable to accept new orders at this time. Learn more...
Based on Steven Spielberg’s futuristic thriller, Minority Report is the only game that lets the player relive the movie experience, combining hand-to-hand combat and futuristic weapons and devices straight out of the movie. Players assume the role of the movie’s hero, PreCrime Officer John Anderton, in an all-new adventure as he attempts to stop an insidious conspiracy from finalizing their evil plans. Players use a combination of hand-to-hand combat tactics and firepower as they journey through 15 futuristic levels of sci-fi cinematic action/adventure. Innovative gameplay features, multiple endings and non-stop action create outstanding suspense and dynamic replayability.