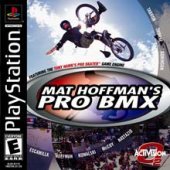 Unavailable
Sorry, this product is not currently available to order
Mat Hoffman's Pro BMX delivers the most cutting edge and authentic freestyle BMX gaming experience ever. Players can ride like Mat Hoffman, the most recognized name in BMX, or on of seven top pros and perform hundreds of freestyle tricks in a variety of realistic vert, street and dirt courses. The game also features multiple modes of play including single player mode, as well as head-to-head two player modes. In addition, with the BMX course editor, players can build their own custom BMX course with ramps, rails, funboxes and a variety of other obstacles.

Ride like the King of BMX!
Players can ride with the skills of the undisputed King of BMX - Matt Hoffman, or as seven other top pros; including Mike Escamilla, Joe Kowalski, Dennis McCoy, Cory Nastazio, Kevin Robinson, Simon Tabron and Rick Thorne. With an easy-to-learn trick and combo system, players can perform hundreds of tricks, combo moves and pro signature stunts in eight interactive Street, Vert and Dirt courses filled with course challenges, secret areas and interactive objects.

BMX Course Editor!
Players can create their own custom BMX courses in real-time 3-D with over one hundred different variations of ramps, rails, funboxes and other obstacles. All creations can be saved to a memory card to share with friends.

Multiple Modes of Play!
Single-player modes include Single Session and Free Ride, as well as an in-depth career mode that enables the player to upgrade their player and bike stats as they progress through the game. They can also go head-to-head in two-player competitions in H.O.R.S.E. and split screen Destruction Derby and Graffiti.