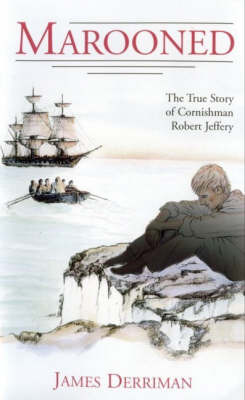 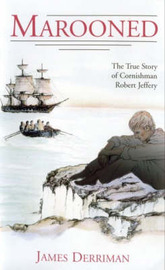 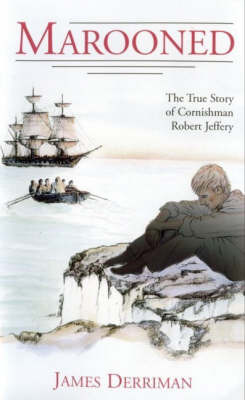 Unavailable
Sorry, this product is not currently available to order
In 1807, a British naval captain marooned an 18-year-old member of his crew from Polperro, Cornwall, on a deserted island in the West Indies (and was later dismissed the service for it). The seaman, Robert Jeffery, escaped to the USA, where he was discovered after a search ordered by Parliament, and paid by the ex-captain not to sue. This extraordinary but true story based on original research is told in "Marooned", first published in 1991 and now updated in this new, revised and fully illustrated edition.

James Parkyns Derriman retired after a career in journalism and public relations to devote time to historical research and writing, specialising in legal and maritime history. For two decades he undertook part-time research work at The National Archives and elsewhere, for lawyers, academics and authors. His personal interest is in the history of the Looe and Polperro area of Cornwall, renowned for its smuggling and privateering exploits. Marooned, the story of a Cornish seaman, was his first full-length work in this field. Mr Derriman's forebears include RN officers from Napoleonic times onwards, one an admiral. He himself served in the wartime Merchant Navy which he entered as a deck boy after beginning his career as a cub reporter in London and Winchester, Hants. After the war he qualified as a barrister, then resumed his journalistic career in Fleet Street. In 1955 he moved into public relations with the J Walter Thompson Co, becoming an associate director, and later joined the former Charles Barker Group to form a PR consultancy, of which he became joint vice-chairman, retiring after five years as Company Secretary of this large British communications group. In 1973-4 James Derriman was President of the professional body now the Chartered Institute of Public Relations, and he is an honorary vice-president of the European Confederation of Public Relations. He is a Freeman of the City of London. His publications include: Pageantry of the law (Eyre & Spottiswoode, 1955) Discovering the law (University of London Press, 1962) Public relations in business management (ULP, 1954) Company-investor relations (University of London Press, 1969) The bridge-builders, joint editor (Associated Business Press, 1980) Marooned (Kenneth Mason, 1991) Killigarth: three centuries of a Cornish manor (published by the author, 1994) Chancel Repair Liability - how to research it (Barry Rose, 2005)
Release date NZ
May 1st, 2006
Author
Country of Publication
United Kingdom
Edition
2nd Revised edition
Illustrations
illustrations
Imprint
Polperro Heritage Press
Pages
168
Dimensions
165x220x25
ISBN-13
9780954913779
Product ID
1752100