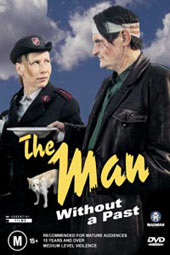 Man Without A Past

Internationally renowned filmmaker and auteur, Aki Kaurismaki, has given us the funny and amusing second installation of his Finland Trilogy.

"The Man Without a Past's hero, M, is a solemn leather-jacketed man (Peltola) who arrives in Helsinki, sits on a bench and promptly gets beaten within an inch of his life by three thugs – a startling and rare burst of violence for Kaurismaki. He is taken to hospital and bandaged up, mummy-style, but soon flatlines and is declared dead. Almost immediately he jolts back to life, and in a visual gag that dazzingly wrong-foots the audience, crunches his nose back into position before heading out in to the world.

Unable to remember who he is, he is taken in by a friendly couple (Niemela and Pakarinen) in a community of down-and-outs living in old freight containers. M does a deal with the freight yard's corrupt and grandiloquent security guard Anttila, aka ‘Whip of God’ (Kuosmanen) for a container complete with a working juke-box stocked with R&B and Blind Lemon Jefferson blues. He doggedly builds himself a new life, with inspiration from Salvation Army officer Irma (Outinen), who returns his chaste pattern."