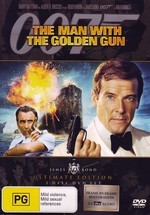 The world's greatest villains have tried to kill James Bond. Now it's Scaraman­ga's turn to try!

The bond must find the missing Solex Agitator a device that will harness the sun's radiation and give awesome power to whoever possesses it. But, also vying for the prize is Francisco Scaramanga (Christopher Lee), a world-class assassin who brandishes a distinctive golden gun.

When 007 discovers he is to be Scaramanga's next target, he is hurled into a deadly game of cat-and-mouse, continuing the search as he evades the killer on his trail. The bond must also contend with Scaramanga's exotic lover Andrea Anders (Maud Adams), and Nick Nack (Herve Villechaize), whose small size belies his lethal abilities.

Even as 007 enlists the aid of sensuous Mary Goodnight (Britt Ekland), he must overcome ferocious odds to survive an explosive showdown on Scaramanga's remote island.