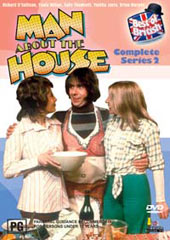 Unavailable
Sorry, this product is not currently available to order
One of Thames TV's most successful comedy series, Man About The House spawned the equally popular spin-offs Robin's Nest and George And Mildred. The perks and pitfalls of mixed flat-sharing are brought home when Robin Tripp (Richard O'Sullivan) moves into Jo and Chrissy's London apartment. Meanwhile their landlords, the Ropers (Yootha Joyce and Brian Murphy), keep a watchful eye on the goings on...