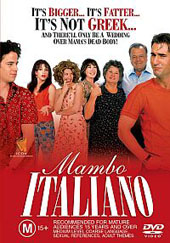 Coming out of the closet may never be easy, and MAMBO ITALIANO takes a comedic look at why it may be even harder for first generation Italian-Canadians. Angelo (Luke Kirby), son of Italian immigrants, realizes at a young age he's gay, and so does everyone else in his Montreal elementary school. Yet somehow his family remains in the dark. After thirty years of living at home with his naive parents (Ginette Reno, Paul Sorvino) and garish sister Anna (Claudia Ferri), Angelo decides to get his own apartment.

A burglary re-acquaints Angelo with Nino, his childhood friend (Peter Miller), now a hardbody twentysomething cop. Nino and Angelo quickly fall in love and Nino moves in, but they decide to keep it a secret from their families. After a disastrous dinner party, chaos ensues, sending Angelo and Nino into a vortex of identity politics. The film's colourful sets stand out, decorated with ostentatious wall patterns that reflect Anna's Fendi-esque wardrobe and the bright hues of the landscape. The film exaggerates other various Italian-immigrant stereotypes for comedic effects, but works hard to earn endearing moments of family loyalty, self-searching, and love.