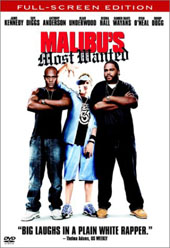 All that Brad (Jamie Kennedy) - make that B-Rad - wants is to roll with his Malibu homeys and bust rhyme as the greatest rapper ever to survive the 'Burbs. But everyone knows a kid from the Left Coast's poshest bling-bling beach is no playa. And Brad's dad Bill Gluckman (Ryan O'Neal), a candidate for governor, knows B-Rad's lack of chillin' is killin' his campaign.

Kennedy gets jiggy with the comedy character he showcased in standup acts and on his TV series. Taye Diggs and Anthony Anderson deliciously play struggling actors hired by the Gluckman campaign to pose as gangstas and scare the poseur out of B-Rad. With added support from Regina Hall, Snoop Dogg and others, Malibu's Most Wanted is comedy straight up.