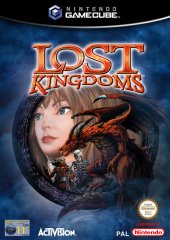 Due to COVID-19, we're unable to accept orders for non-essentials items at this time. Learn more...
In Lost Kingdoms, the player takes control of a beautiful heroine, Princess Katia, on a quest to rid the land of a deadly menace intent on engulfing the five Kingdoms of Argwyll. During the adventure, the player must find and gather the cards that hold the power to unleash incredible creatures into battle, fighting off the endless hordes of monsters that stand in their way.
“Lost Kingdoms invites players to experience an epic fantasy world filled with magic, monsters and mystery,” states Larry Goldberg, executive vice president, Activision Worldwide Studios. “The game delivers a fantastic 3D experience with guardian creature cards that you can collect, control and use to battle against an evil power and its dominions.”

Throughout the game, players will explore over two-dozen graphically rich 3D worlds as they uncover the mystery that threatens to destroy the Five Kingdoms of Argwyll. Along the way, gamers will have the opportunity to collect over 100 unique Guardian Cards that can be used to release powerful creature allies such as fighting skeletons, ravaging wolves and fire breathing dragons. Each creature has its own special attack moves, which increase in range and power as Katia gains experience.

In addition to the single player story mode, players can take on friends in two- player versus mode, and pit their guardian creature card collection against one another in a battle to the finish.