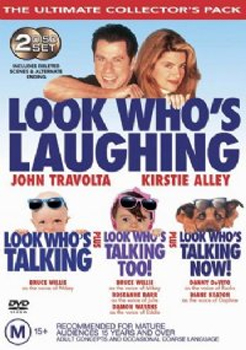 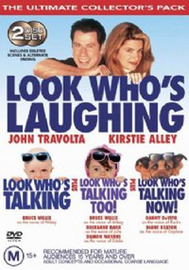 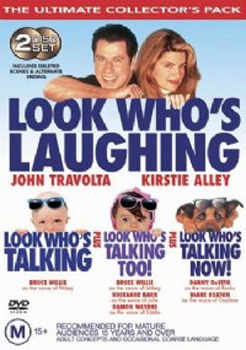 The original is great, the second film is average at best, and the third – don't even bother watching if you arer over 10 years old!

Look Who's Talking
Starring Kirstie Alley, John Travolta and the wise-cracking voice of Bruce Willis, Look Who's Talking is the box-office smash which takes an hilarious, offbeat look at motherhood and romance from baby Mikey's point of view. Led on and let down by boyfriend Albert (George Segal), 32 year old Mollie (Alley) is looking for a proper father for her son… Little Mikey favours cab driver-turned-baby sitter James (Travolta). It's a case of baby knows best, but by the time he learns to talk, it could be too late!

Look Who's Talking Too
In this hilarious sequel to Look Who's Talking, little Mikey figures he's got it made after uniting his mother (Kirstie Alley) with the dad of his dreams (John Travolta). But instead of family bliss, Mikey gets the biggest surprise of his life – a baby sister. Bruce Willis returns as the voice of Mikey, while Roseanne Barr's voice delivers baby Julie's delightful wisecracks.

Together, these two fast-talking tots face a series of kiddie dilemmas, including the trials of potty training, their parents' marital squabbles, and an inevitable – but very funny – dose of sibling rivalry. As this loving family is about to learn, twice the trouble is also twice the fun!

Look Who's Talking Now
Now that the kids finally know how to talk, this family is going to the dogs! Thanks to the unique voice talents of Dannny DeVito and Diane Keaton as two canine comedians determined to turn the household upside down, Look Who's Talking Now is as fresh and funny as the original.

John Travolta and Kirstie Alley return as the fun-loving parents whose marriage is put to the test when she loses a job and he finds one… with a lady boss who shows an over-active interest in merging. Loaded with one-liners and enough humour for kids and adults alike, Look Who's Talking Now proves that when it comes to comedy, it's a dog's life!