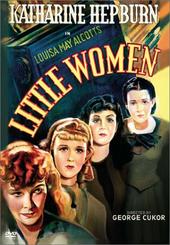 Little Women is a "coming of age" drama tracing the lives of four sisters: Meg, Jo, Beth and Amy. During the American Civil War, the girls father is away serving as a minister to the troops. The family, headed by thier beloved Marmee, must struggle to make ends meet, with the help of their kind and wealthy neighbor, Mr. Laurence, and his high spirited grandson Laurie.

Louisa May Alcott's beloved story is one of the most-read novels ever written. It has also proved popular film and telefilm fodder (at least six versions plus a TV series). In addition, Little Women is one of those rare literary projects that can truly be done well on screen. This, the 1933 version, chronicles the lives and loves of sisters Jo, Meg, Amy, and Beth (played, respectively, by Katharine Hepburn, Frances Dee, Joan Bennett, and Jean Parker). It's a superior rendering to the amiable, perky 1949 version with June Allyson, Janet Leigh, Elizabeth Taylor, Margaret O'Brien, and Peter Lawford, and comparable to the beautiful, feminist Gillian Armstrong 1994 take. Douglass Montgomery's Laurie isn't nearly as dreamy as Christian Bale's (1994), but the lack of chemistry between him and Hepburn's Jo is perfect for the story, in which Jo loves him like a brother. Jo's real love she offers up to perhaps the finest Professor Bhaer (Paul Lukas). Character actress Edna May Oliver is at her indignant best as Aunt March. Director George Cukor's vision is elegant, warm, and as true to the original source material as 117 minutes allows. This Little Women was a huge box-office hit, and broke all the records to that time. --N.F. Mendoza