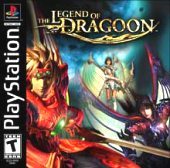 Due to COVID-19, we're unable to accept orders for non-essentials items at this time. Learn more...
The journey that seeks the past ends and the journey to discover today begins. Unveil a fantasy of magnificence, deception, magical combat and retribution in the highly anticipated RPG The Legend of Dragoon. Experience this epic tale spanning four CDs only on the Playstation.

The Legend of Dragoon takes place in a setting resembling the Middle Ages. The story is as follows..... All life, including 108 different races, was created by a magical tree. Of those 108 races, there were humans -- and also a race that eventually enslaved them. The rebellion against this mass enslavement led to the great war known as the "Dragon War." This war was fought between "Dragoons," humans who could control dragons, and the "enslavers," who are capable of using magic.

The game picks up 10,000 years later, where both Dragoons and the former enslavers have vanished, with only the humans remaining. We find the main character, Dart, in the middle of a journey to find the demon who killed his parents.
Release date NZ
January 17th, 2001
Publisher
Sony Computer Entertainment
Product ID
1455949