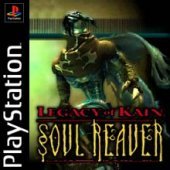 Unavailable
Sorry, this product is not currently available to order
Mature: Suitable for mature audiences 16 years of age and over.

Legacy of Kain: Soul Reaver pushes the PlayStation to the limits with an incredible graphics engine. As Raziel, stalk Nosgoth feeding upon the souls of your enemies. Battle 5 different clans of vampires as you explore a vast 3D world.
A millennium has passed since Lord Kain set his capital in the ruins of the Pillars and began his conquest of the world. His first act was to recruit a cadre. Dipping into the underworld, Kain snared six souls and thus birthed his lieutenants, of which I, Raziel was one. We, in turn prowled the twilight of purgatory building six legions of vampires to pillage Nosgoth.

The destruction of the major human kingdoms was inevitable. Within a hundred years, humanity had been thoroughly domesticated. Of course, there remained some feral humans scattered across the hinterlands, clinging to their hopeless holy war to rid Nosgoth of "the vampire scourge". They were tolerated. They made existence for the fledglings more challenging.

After the taming of the humans, our real work began; shaping Nosgoth to our will. Slaves built a shrine around the Pillars. A monument worthy of our new age. Worthy, of our dark renaissance. Huge furnaces were constructed to belch smoke into the sky, shielding the land from the poisonous effects of the sun. Never had the world known such a time of beauty. However, we grew bored.

We allowed the lesser vampires, the remains of the legions, their intrigues. They provided amusement and spice to an increasingly uninspired court. As faction fell against faction we bet upon the outcome. We helped and foiled plots at our whim. We were the Council and Lord Kain, our only master.

The humans think it is a poison of the blood that makes us what we are. Fools, the blood only feeds the bodies we live in. To create a vampire, one must steal a soul from the abyss to reanimate the corpse. It is the body that demands the blood sacrifice; our souls gain their advantage from the powers of the underworld. As we matured, our earthly bodies evolved into a higher form. Through The Change, we assumed the power and nobility of the Dark Gods. With each Change, the trivial affairs of vampire and man held less interest.

Always, it was Kain that would Change first. After the master had experienced a new gift, one of us would follow, in a decade or so. That is, until I had the 'audacity' to evolve before my master. I was gifted with wings. And for my impertinence I was damned.

To us the touch of water is agony; it burns our flesh like acid. My punishment was to be cast into the Lake of Lost Souls - the execution ground for traitors. As my brethren heaved me into the air I could see the bemused expressions on their faces. The transitory thrill of something new. Then the pain began. Melting, twisting, burning, falling. A new experience indeed. Time. I have no concept of how long I fell. Only that there was an end to the fall and through the pain I heard a voice. At first, I thought it merely the echoes of my own tortured mind, but I grew to understand that it was more.

The Elder explained much to me. It told me of creation, of death, of souls and of hunger. For eons the Elder fed upon the souls of Nosgoth. Until, Kain's empire of vampires deprived the Elder of sustenance. For centuries his hunger grew and festered in this place.

The elder offered me redemption; if I would stalk the material plain slaying my former brethren, I would have the chance to avenge myself against Kain.

How could one refuse?