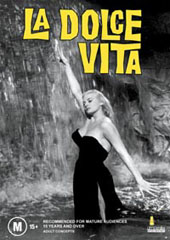 Marcello (Marcello Mastroianni) is a young playboy and jaded journalist who spends his days between celebrities and rich people, seeking ephemeral joy in parties and sex. When a famous film star comes to Rome, he does everything he can to meet her, and when he does, he is totally charmed by her.

Famous for coining the word ‘Paparazzo’ after one of its characters, this is one of Fellini's best films and made its title synoymous with the exuberant and decadent lifestyle of an era.