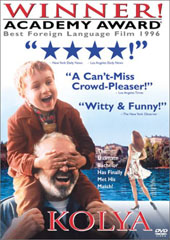 The perfect grouch has met his match. A five-year-old boy named Kolya.

Winner of an Oscar and a Golden Globe for Best Foreign Film, Kolya is an extraordinary motion picture that'll touch your heart one moment and make you laugh the next! Louka, a middle-aged Czech cellist is a skirt-chasing bachelor who enjoys a lifestyle free of responsibilities. When he finds himself strapped for cash, he agrees to a marriage of convenience. But after his new bride skips town, Louka is left to father her five-year-old Russian son, Kolya.

Neither could be more unhappy with their predicament, especially since they don't even speak the same language! It'll take time and patience for the cultural barrier between this unlikely father-son duo to fall, but when it does, an unbreakable bond forms in its place. Acclaimed by critics worldwide for its poignant story and outstanding cast, Kolya shines with heartwarming comedy you'll long remember!