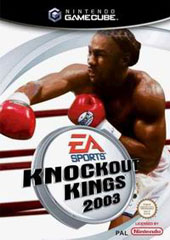 Due to COVID-19, we're unable to accept new orders at this time. Learn more...
Knockout Kings 2003 for the Nintendo GameCube offers all the big time boxing moments, lightning-fast gameplay and features the franchise is famous for. With a long list of the greatest boxers of all time. Create countless dream matches with Muhammad Ali, Joe Frazier, Roberto Duran and Sugar Ray Leonard or stick with the current lions including Felix Trinidad, Lennox Lewis, Oscar De La Hoya, Fernando Vargas, and many others. Over 20 fictional boxers are also available.

For the first time in the history of Knockout Kings boxing, gamers will be able to take on opponents in single elimination tournaments with un-timed fighting in an all-new mode. Gamers will experience arcade style boxing with a hip new feel. On screen cues will spur fighters on as they earn progressive damage levels for user selectable special punches, which can be unleashed on your opponent at any time. A more detailed stat tracking system will award points for the fighter's actions in the ring such as quickest KO, number of blocks, and most knockdowns. These points will be used to track a fighter's status in the ring. In two-player mode, pre-select what determine the winner either by knockdowns or knockouts, points earned and time limits.