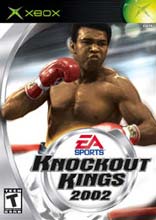 Due to COVID-19, we're unable to accept orders for non-essentials items at this time. Learn more...
Knockout Kings 2002 features an all-new game engine with the fastest, most intense boxing action in the series. Lace up the gloves, throw in the mouthpiece, and experience the thrills of boxing’s biggest moments, most devastating combinations, dazzling footwork, crushing blows and the best looking boxers ever. A long list of champions allows fight fans to create countless dream bouts with such legendary fighters as Muhammad Ali, Joe Frazier, Roberto Duran, and Sugar Ray Leonard along with current greats – Felix Trinidad, Lennox Lewis, Oscar De La Hoya, and many more.

STILL the undisputed champion of the world.

Brand new game: An all-new engine increases the game’s responsiveness and fluidity as boxers now move with the speed and agility of their real life counterparts..

Motion capture technology: Motion capture brings the boxers’ movements to life. With the addition of hand animation and motion blending, the boxers have extremely fluid movements, bringing a whole new level of interaction and realism to the ring.

New graphics: The vastly improved boxer polygonal count makes for the most detailed boxers in the history of the franchise..

Create a Player: Develop a fighter from scratch and bring him up through the ranks in Career Mode and unify the belts of the Light, Middle, and Heavyweight divisions.

Multiplayer Tournament Mode: Go head-to-head with up to 8 players vying for the championship belt.