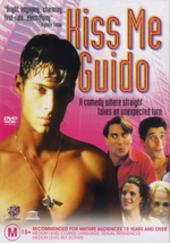 When apartment-hunting Frankie Zito reads the classified ad, he doesn't know GWM means Gay White Male. He figures it means Guy With Money – and he's sure he'll soon have enough cash to qualify.

With plenty of laughs and good-hearted exuberance, Kiss Me, Guido puts lifestyles on a comic collision course. One hilarious mix-up follows another as straight-arrow Frankie (Nick Scotti), a pizza maker from the Bronx, comes to terms with Greenwich Village gay culture… and his new roomie, actor/choreographer Warren (Anthony Barrile), comes to terms with Frankie.