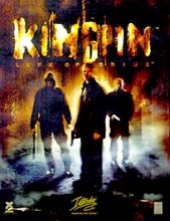 Unavailable
Sorry, this product is not currently available to order
In a world that combines the past with the present, the Kingpin rules the streets. A fully realized and populated 3D city sets the backdrops for the most violent, dirty, and downright frightening look ever into the life of a criminal.

Somewhere in a past that never existed lies the world of Kingpin- a landscape of burned-out buildings and urban decay, where local gangs rule the streets. Begin your rise to the top by assembling your own gang of thugs. If a new member turns out to be a punk, waste him and make way for new blood. Moving up in the world is sure to attract the attention of the Kingpin; eventually you're going to have to take him down.
But you knew that anyways...
Features: