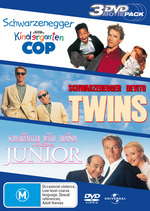 Kindergarten Cop:
Arnold Schwarzenegger stars as an undercover cop posing as a kindergarten teacher in order to catch a dangerous criminal. Once he wrangles his young charges, as well as the affections of a beautiful teacher (Penelope Ann Miller), he prepares for a final showdown with his intended prey!


Twins:
An ambitious genetic experiment takes the wrong turn when two twins - who look nothing alike - are born and then separated. Years later, the unlikely siblings meet: Julius, a highly educated but sheltered giant with a big heart, and Vincent, a pint-sized hustler with an insatiable lust for women and money. With girl-friends in tow and a hitman on their tail, the new found brothers set off on a wild, cross-country misadventure to find their mother - but end up finding out more about themselves.

Special Features:
Junior:
You'll never guess who's going to have a baby. Watch as the maternal tables are turned forever when, after taking an experimental drug, Arnold Schwarzenegger becomes pregnant!