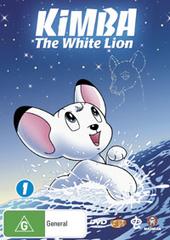 Unavailable
Sorry, this product is not currently available to order
A fan favorite for years, this series is again available. Unlike today's other "children's" shows which are utterly devoid of meaning, Kimba stands alone... and it's now back to show new generations how good a show can be. Also, you might see for yourself the similarities to another big-screen picture about a lion king.


1. GO, WHITE LION!
(Japanese title: Go, Child of Panja)
The white lion Caesar has begun the creation of a peaceful animal kingdom. His mistake is that he angers the nearby humans, and a hunter, Viper Snakely, is hired to dispose of him. Snakely finally succeeds, also capturing Caesar's widow, Snowene, whom he plans to sell to a zoo. On an ocean boat, in a cage, a baby white lion is born to Snowene. It is Kimba. Kimba's mother tells him he must jump from the ship and return to the jungle to carry on for his father. The young cub reluctantly obeys and dives into the ocean. Birds, fish, and butterflies each contribute in their own way to help Kimba make the journey.

2. THE WIND IN THE DESERT
(Japanese title: The Wind in the Desert)
Kimba's return to his father's land seems to be short-lived. He is captured by hunters and gets caught up in an illegal weapons sale and government agents. Along the way he learns that his pacifist ideal must be tempered with the willingness to fight.

3. A HUMAN FRIEND
(Japanese title: Animal School)
Roger and Mary are lost in the jungle after a plane crash, and the animals treat them with suspicion. When Geraldine breaks a leg, Kimba goes to seek these humans' aid for her. He meets Boss Rhino and learns that Rainbow Bridge is ready to collapse. Kimba must find some way to warn the people of the dangerous bridge. He desperately tries to call out in a way they'll understand -- and with great effort he sounds the word "danger." The warning is too late to stop Mary, who is most of the way across when the bridge breaks up. She makes it to the other side, but assumes Roger is lost in the ravine. Roger had seen Mary's position and assumes she made it across safely. He aids the injured giraffe. The animals are all eager to learn to be able to speak with this new friend. Roger Ranger decides to stay in the jungle and teach his new friends all he can. Thus an important link in Kimba's dream --communication-- is set in place.

4. GREAT CAESAR'S GHOST
(Japanese title: Samson, the Wild Ox)
The old ways and the new collide as Samson the water buffalo brings three domestic mules for the predators to eat. Fearing his size and strength, the animals go along with him, leaving Kimba feeling that he has no support.
Dan'l Baboon, Bucky, and Pauley Cracker decide Kimba needs some special encouragement. They steal the hide of Kimba's father, Caesar, from the hunters, and pretend to be his ghost.

5. FAIR GAME
(Japanese title: Memory of the Continent)
In a flashback, Kimba tells of being with Roger, Mary, & Mr. Pompus in Paris, and meeting Speedy's grandfather, Quasimoto. The episode ends with Kimba's vision of a futuristic paradise.

6. JUNGLE THIEF
(Japanese title: The Starving Savannah)
The farm is not producing food yet and times are hard. Henrietta River Hog is ill and steals reserve supplies of food.

7. BATTLE AT DEAD RIVER
(Japanese title: The Fight at Donga)
Kimba first meets Kitty by way of rescuing her from Claw. Claw decides it is time to rid himself of Kimba, and sets up a plan to frame him, thus leaving it to the other animals to banish Kimba.

8. THE INSECT INVASION
(Japanese title: The Mad Cloud)
Kimba has convinced the meat eating animals to change to vegetables so that the smaller animals can live without fear of being attacked. They have all worked together to create a farm for growing their food. Suddenly, a huge cloud of invading insects sweeps down on them. Valiantly the animals fight to save their crops. Kimba's plan succeeds in capturing the entire invading force, and in so doing creates a new food source for the carnivores.

9. THE FLYING TIGER
(Japanese title: The Monstrous Animal or The Winged King)
Professor Madcap incapacitates Clutch Eagle to create a Flyger, which becomes a menace to everyone.