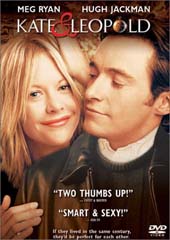 Have been wanting this DVD for some considerable time. The service that I received from Mighty Ape was first rate. Very happy to pass Mighty Ape on to my niece and nephew who used the service the day they joined. They are also happy.

Excellent and extremely well made movie. It is most certainly a very romantic, feel good movie.

And its one of the best love stories out there; makes ya wish for your own handsome 1800s gentleman who will sweep ya off ya feet sighs

If they lived in the same century they'd be perfect for each other.

Kate and her actor brother live in N.Y. in the 21st Century. Her ex-boy friend, Stuart, lives above her apartment and finds this space near the Brooklyn Bridge where there is a gap in time. He goes back to the eighteen hundreds and takes pictures of the place. Leopold, a man living in the 1870's, was puzzled by Stuart's tiny camera and decides to follow him and they both ended up in this century. Leopold is clueless about his new surroundings. He gets help and insights from Charlie who thinks that Leopold is an actor who is always in character. Leopold is a highly intelligent man and tries his best to learn and even improve the modern conveniences that he encounters.