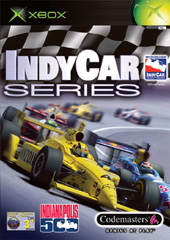 Unavailable
Sorry, this product is not currently available to order
Set to be the most accessible, exciting and entertaining open-wheel racing game designed, Indy Racing League features adrenaline-fuelled, ultra-close pack racing, with up to 33 cars racing on track, and requires total focus to handle the incredible overtaking manoeuvres at speeds well over 200mph.

Indy Racing League delivers the Indy Racing season, including the Indianapolis 500 (Indy 500) race, "The Greatest Spectacle in Racing". The season is an open-wheeled championship on short ovals and superspeedways throughout the US, including California and Texas, with the Indy 500 as the highlight of its racing calendar. Indy cars are similar to F1 but are powered by 3.5-litre V8 engines, used by all teams. Fast and furious, the 650 bhp cars reach 0-100 mph in less than three seconds.

As a game, Indy Racing League provides immediate high-paced action, authentic yet intuitive handling, spectacular collisions and a dynamically adjusted level of difficulty to keep the challenges on the circuits coming thick and fast.