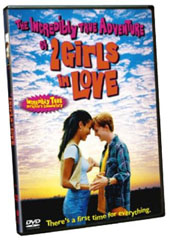 This movie is a great little indie film. I personally felt it was a very enjoyable storyline. The story of Evie and Randy is one of those sweet little tales of first love.

The movie is barely even low budget, almost no budget. But given its constraints it managed to tell the story in a simplistic manner. Taking into account the nature of the film some of the camera work is actually quite incredible.

If you enjoy a sweet story of fist love with that cliché rich meets poor storyline then this is a fantastic movie. Perfect in its simplicity.

There's a first time for everything.

The story of two girls, Randy and Evie. Randy is a low economic class lesbian living with other lesbians including her Aunt. Evie is a wealthy, popular girl, with a boyfriend. When Evie befriends Randy, she begins to feel a passion for her she's never felt before. What follows is a sweet, tender romance between the two, while Evie is cast away by her friends and Randy is chided by her family. The two don't care, though, because they are in love.