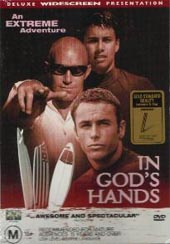 If you know about decent surfing you've already heard of this movie. Mighty Ape seemed to be the only company that had this and could get this movie so stoked!!!!

Mickey, Shane and Keoni live to surf, but they aren't just counting sesets. Theirs is not merely a search for the elusive wave, but a solemn pact with nature–to take it to the extreme. World Class surfers Patrick Shane Dorian, Matt George and Matty Liu star in a dramatic adventure of friendship and courage, featuring some of the most spectacular surfing footage ever filmed.