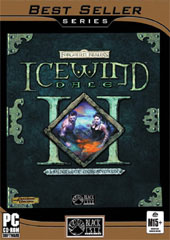 Unavailable
Sorry, this product is not currently available to order
Icewind Dale II continues the classic dungeon crawling experience of the first game, with new races, classes, kits, items and spells, and a horde of new monsters and areas to explore. Characters can play as drow, half-orcs, duergar and other races, and take pleasure in the joys of dual-wielding and new kits, like the Mercenary and the Dreadmaster of Bane. Hours of adventuring await...

A grave new threat has arisen in the North, a threat that seeks to seal off the Ten-Towns from the rest of Faerï¿½n in a bitter power struggle. A vicious horde of goblins, orcs, and bugbears has gathered beneath the mysterious banner of the Chimera and are marching on the port town of Targos. Fearing that they will be overrun, Targos has sent out a call for all able-bodied adventurers, soldiers, and mercenaries to sail north to stand with the town's defenders against the encroaching horde... and you and your companions have answered the call.

New 3rd Edition Dungeons & Dragons Classes:
The Barbarian - Play as one of the merciless warriors of the north, calling upon your greater strength, speed, and rage to carve a path through your enemies.

The Monk - If unarmed combat is your style call upon the Monk's weapons: contemplation, action, and a swift one-two bone-crunching throat strike.

The Sorcerer - If you prefer to hurl spells at your opponents without clutching a spell book, play as a sorcerer and draw upon the raw power within yourself to strike down your opponents.

Kit Classes - Icewind Dale II features expanded character creation options, including several new kit classes, such as the Cavalier and Kensai from Baldur's Gate II: Shadows of Amn, and many new kits like the Dreadmaster of Bane and the Mercenary.

New Races and Sub-Races: Several new races have been included, allowing you to play as a half-orc, gold dwarf, tiefling (half-demon), assimar (half-angel), or any of a number of Underdark races, including the infamous drow (dark elf), Duergar (dark dwarves), and deep gnomes.

Dual-Wielding: Icewind Dale II characters now have the ability to wield a weapon in each hand. Dual-wielding death is no less than your opponents deserve.

Improved Heart of Fury Mode: There's more rewards for taking the Heart of Fury difficulty challenge in Icewind Dale II - aside from the greater monsters and danger, you'll get greater rewards, including hundreds of new items that can only be found in the Heart of Fury mode - many of which are the most powerful items any AD&D character has ever seen.

Engine Improvements: Optimizations to the Infinity Engine to allow for even larger battles than ever before.