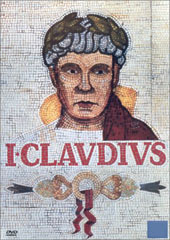 This is the BBC at its very best. This Roman costume drama is a biographical production of the life of the Emperor Claudius. It follows his beginnings from the time Octavian became Emperor after defeating Marc Antony at Actium through the horrors of the mad Caligula to the eventual crowning of Claudius as Roman emperor. Along the way are the political intrigues and murders of Roman leaders and politicians. Although based on Rupert Graves novel, the historical events are accurate.

Based on the novels by Robert Graves, this stunning BBC TV production of Claudius' epic story spans the analogues of Roman history from the mighty Augustus, through to the madness of Caligula.

Inspirational performances from a star-studded cast including Derek Jacobi as Claudius, John Hurt as Caligula, Brian Blessed as Augustus, Patrick Stewart as Sejanus, Sian Phillips as Livia, David Robb as Germanicus and Fiona Walker as Agrippa make this a compelling production.