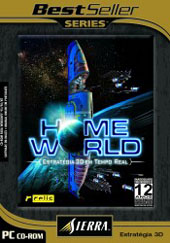 Running this on a new Win7 box and it runs like a dream. Gameplay and most of the graphics are still impressive for such an old title.

1 out of 1 people found this review helpful.
The next dimension in real-time strategy gaming.

An evolutionary step in gameplay and technology, Homeworld simultaneously delivers cinematic-quality graphics, stunning special effects, brilliantly-rendered ships and an innovative interface. In addition, players have unparalleled freedom to view epic space confrontations from any position imaginable - whether from an eagle's-eye view miles above or piggybacked on the roof of a fighter in mid-battle.

Combining elements of space combat, strategic play and action, Homeworld promises to deliver elements of our favorite games in a totally fresh experience. So fresh is the experience, in fact, that Homeworld is destined to leave gamers thinking: "Why hasn't anyone thought of this before?"

Homeworld's epic tale begins in the far reaches of the universe. You were the benign lords of a peaceful society - located in the center of a lush spiral galaxy. For as long as anyone could remember, no one challenged your peaceful existence. But then came the conquerors. Invading your peaceful society with the sole purpose of overtaking your world, these insidious outsiders wiped out billions and relocated the survivors to a cold, lifeless planet on the edge of the galaxy.

Hundreds of years later, all knowledge of your previous existence has been lost. Only vague myths remain, and a single mysterious artifact: a crystal. From the crystal a faint signal is extracted and deciphered into an astronomical heading. An immense mothership is built which will carry millions of people along this unknown path, towards what may be the Homeworld.

In addition to the single-player game, a multiplayer option is also included and allows for up to 8 players to compete simultaneously via WON.net, Cendant's free online game service. Homeworld will also offer support for a variety of 3D graphics accelerators. Specific information on supported cards will be revealed in the near future.