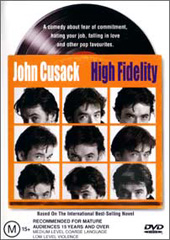 Based on the excellent Nick Hornby, this is one of the few rare films that are just as good if not as better than the book its based on! Director Stephen Frears does a wonderful job getting the tone of the book across, and the role of Rob Gordon was tailor made for John Cusack. Rob Gordon is the anti-hero, we all have inside of us. With a hilarious and memorable supporting performance from Jack Black, this film delivers the laughs, the drama, and great characters. Great soundtrack too. Highly recommended.

A comedy about fear of commitment, hating your job, falling in love and other pop favorites.

Ever since a brief liaison under the football benches in grade 7, Rob Gordon has been cursed with a romantic hex. All of his relationships seem to hinge on some essential bond and every time, Rob blows it. Now he owns a semi-failing record store called Champion Vinyl and toils over his current possible break-up with Laura. This leads to Rob examining his Top Five Break-ups of all time.

Along for the ride are his two wacky clerks the hysterically funny rock snob Barry and the more quietly opinionated underachiever Dick. Although they have an encyclopedic knowledge of pop music and are consumed with creating their all-time favourite top-five lists of songs it is of no help to Rob. Poppy, witty, quirky… High Fidelity is sure to make your all-time top five list for comedies with a bullet!