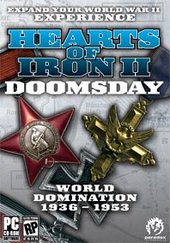 This is one of the best strategy games I have played, also one of the most in-depth and involved. This game does not win awards for eye candy but gameplay factor is good. The kind of game that you could literally spend 1–2 weeks playing the grand campain of 1936–1953.

Hearts of Iron II Doomsday is a standalone, complete version of the game that expands upon Hearts of Iron II, by increasing the time line to include the development of super weapons. Taking advantage of the huge gaming community, many balancing points and game play improvements have been included, enhanced by a significantly improved game A.I. The game also includes a complete scenario editor, so players can fully customize games of their own design, taking them to a whole new level of play.