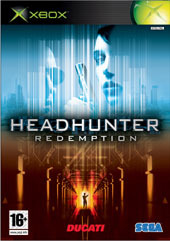 Due to COVID-19, we're unable to accept orders for non-essentials items at this time. Learn more...
Twenty years after the devastation caused by the Bloody Mary Virus, a new order emerged based on two distinct but totally independent worlds, divided by the ultimate consumerist society – ‘Above’ and ‘Below’.

‘Above’, a glittering metropolis of glass and steel towers, entwined by elevated highways, its citizens controlled by ever-present media and the powerful corporations behind it. ‘Below’ is the home to criminals, undesirables and misfits. Meeting all the needs of ‘Above’ in return for the right to survive. Society’s conscience wiped clean.

Maintaining law and society order is veteran Headhunter Jack Wade, older, wiser and battle hardened. At his side is the reluctant new sidekick, the rebellious street kid Leeza X. Whether ripping up the highways of the silver metropolis on a super bike or stalking the criminal masterminds of the shadowy underworld, they are led into the greatest danger of their lives and must overcome something much more sinister than a simple human threat. Each must face their darkest fears. Together they must redeem a world facing chaos…