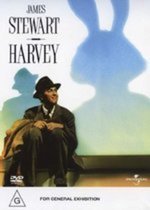 I loved this movie about a man with an invisible friend, Harvey, a six foot rabbit. Its a fun story with a happy ending, suitable for all age groups. It won several awards the year it was made and it was famous for a whole generation.

Who would have thought a 6"2 and 1/4' rabbit would be such an amazing invisible friend. James Stewart with his wonderful dry wit makes this a must see

The Wonderful Pulitzer Prize Play… becomes one of the Great Motion Pictures of our Time!

In the classic Hollywood comedy Harvey, James Stewart plays Elwood P. Dowd, a mild-mannered, pleasant drunk, who just happens to have an invisible friend resembling a 6-foot rabbit. Things get considerably worse when he insists on introducing everyone to his pal Harvey, driving his sister Veta crazy. Only Elwood can see Harvey, who is a rather large white rabbit, six feet three and a half inches tall. In desperation Veta tries to have Elwood committed and to Chumley's Rest sanatorium…