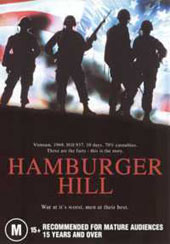 War at it's worst, men at their best.

It was Vietnam, 1969, Hill 937, 10 days, 70 percent casualties. Those are the facts. This is the story: dodge the gunfire, get caught behind enemy lines, go into battle beside the brave young men who fought and died, and feel their desperation and futility.

A raw, gritty and totally unrelenting dramatic depiction of one of America's bloodiest wars. The men of Bravo Company are facing a battle that's all up hill… up Hamburger Hill. 14 war-weary soldiers are battling for a mud-covered mound of earth so named because it chews up soldiers like chopped meat.