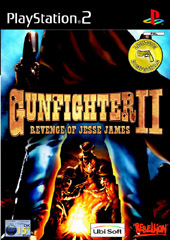 Unavailable
Sorry, this product is not currently available to order
Considering its perfectly apt subject material, it's surprising there haven't been more shooters based on the Wild West. If television has served us correctly, all cowboys used to do was shoot stuff with big guns (and possibly enjoy a quick smooch with the local lovely lady). So how about reliving such thrills via your PS2? Well now you can with this latest gun game from Ubi Soft, Gunfighter II: Revenge of Jesse James.

As the name suggests, you take on the role of the famous fast-shootin' outlaw. As the story has it, he is laying down the law on his double crossing partner, Bob Younger, who has stolen his gold and kidnapped his sweetheart. So it's high time Jesse unhooked his six-shooter, saved his woman and sent that varmint packing in a pine box.

The game itself takes the familiar form of your typical arcade shooter, as you blast your way through a variety of 'spaghetti western'-style levels, packed full of baddies. The premise is extremely simple: shoot stuff, move on to the next level, shoot more stuff. Being based in the Wild West, progression through the game takes you through all the familiar, cliched locations you've seen a thousand times before, such as saloons, town squares and camps, each throwing up an endless supply of dirty adversaries that pop up from behind crates, barrels and carts.

Sequel to the original Gunfighter: The Legend of Jesse James on the PSX, Gunfighter 2 follows it up as you would expect. It doesn't offer much more than the standard 'point and fire' game mechanic but it obviously looks a lot nicer and is a worthwhile quick blast.