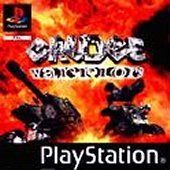 Due to COVID-19, we're unable to accept new orders at this time. Learn more...
There is an organized tournament that takes place between the world's most powerful gangs known as "The Death Ring" in which highly customized armored vehicles are pitched into battles of deadly combat. On small island fortresses rival gangs from different countries wage war against each other in their deadly wheeled weapons, designed and built with protection money amassed in their territories. Once you align with a gang, you choose a vehicle of destruction and enter the tournament.

The aim of the game is to destroy the defense network of your gang opponent in order to progress to the next match.

The islands are loaded with dozens of attack droids and gun emplacements that are programmed to attack you. After successfully eliminating all opponents from each gang, you must engage the final Crime Lord in combat.