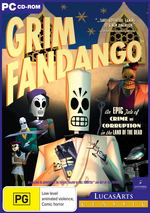 One of the great adventure games of the 90s, alongside classics such as Full Throttle, Day of the Tentacle, and the first three Monkey Island games, and thought by some to be the greatest of them all. Like these others, Grim Fandango has a superbly wry sense of humour, blisteringly funny one-liners, and challenging (but rarely infuriating) puzzles.

This one is set apart by its very strong storyline, its outstanding soundtrack (a mix of jazz and Mexican), vivid atmospheric settings, and witty parodies of Raymond Chandler, Casablanca, and other noir fiction. The characters are unforgettable, the voice acting is even better than Full Throttle, and in the last climactic phases the game becomes quite heart-racing at times – unusual for an adventure. I defy anyone not to cheer out loud when Glottis … but no, I mustn't spoil it. A must.

Something's rotten in the Land of Dead and you're being played for a sucker. Meet Manny Calavera, travel agent at the Department of Death. He sells luxury packages to souls on their four-year journey to eternal rest. But there's trouble in paradise. Help Manny untangle himself from a conspiracy that threatens his very salvation.

Features:
A bizarre afterlife adventure -- a homage to Mexican folklore with a film noir twist.
Extraordinary 3D Art Deco -- and Aztec-inspired environments.
The dead come alive in a cast of 55 characters and over 7,000 lines of brilliant dialogue.
Hundreds of puzzles to challenge the novice and veteran adventure gamer.
Designed by Tim Schafer, creator of Full Throttle and Day of the TentacleÂ®.
The seamless interface puts players smack in Manny's world.
Travel through 90 exotic locations, from the bustling metropolis of El Marrow, the the mountaintop portal to the Ninth Underworld.