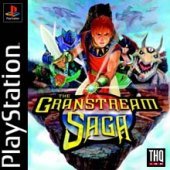 Due to COVID-19, we're unable to accept orders for non-essentials items at this time. Learn more...
Many years ago an ancient world is nearly destroyed by war. Two sides - the Army of the Empire of Sorcery and the Army of the Federation of Spirits are fighting for the dominance of their culture. One of the nations unlocked the seal of the forbidden super-weapon causing a massive catastrophe which plunged the world into complete darkness and flooded the Earth.
Four wise men, with extraordinary magic powers lifted up four continents into the air with their magic spells, saving the human race from total extinction . But now the wise men are gone and the continents are slowly sinking into the water. It is even rumoured that the Army of the Empire of Sorcery is on the move once again. The only hope left for the salvation of humanity is the glowing Sceptre, a legendary object which has been entrusted to a young boy named Eon.
The Granstream Saga is an epic role playing game, and a lot more. The storyline is extremely engaging, and the battle scenes have the feel of a 3D fighting game. There are no cumbersome menus to use during fighting, instead you can manoeuvre quickly and easily around your enemies, attacking them from all sides. With over a 1 000 weapons combinations and loads of hostile characters, this game has plenty of action.
Unlike most role playing games, you have complete control over your character, and you gain experience as you make your way through the different levels. There are many obstacles to overcome and you need to use a combination of skills and magic spells to help you on your quest.