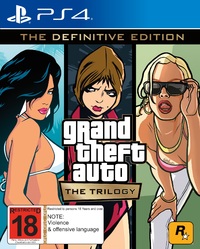 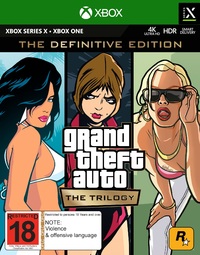 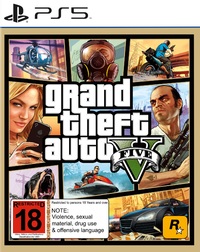 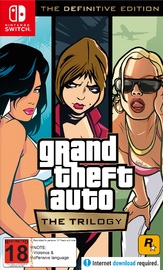 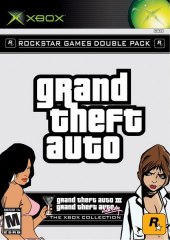 This product is no longer available new.
Available from Marketplace sellers:
This supurb value-for-money Xbox double pack contains both versions of the blockbuster hits Grand Theft Auto 3 and Grand Theft Auto: Vice City. Note: This is the MA15 Australian version of the game. GTA 3 You've been betrayed and left for dead. Now you're taking revenge, unless the city gets you first. Mob bosses need a favor, crooked cops need help and street gangs want you dead. You'll have to rob, steal and kill just to stay out of serious trouble. Anything can happen out here. Featuring a fully 3-D living city, a combination of narrative driven and non-linear gameplay and a completely open environment, the game represents a huge leap forward in interactive entertainment. For the first time, players are put at the heart of their very own gangster movie, and let loose in a fully-realised 3 dimensional city, in which anything can happen and probably will. With a cast of hundreds, 50 plus vehicles, ranging from sports cars to ice cream trucks and from boats to buses, 3 hours of music, including opera, reggae, house, drum and bass, pop and disco, a huge array of street ready weapons and some of the seediest characters in video game history, Grand Theft Auto 3 is a sprawling epic which will show you that sometimes, crime can payand sometimes it can pay you back. GTA: Vice City Having just made it back onto the streets of Liberty City after a long stretch in maximum security, Tommy Vercetti is sent to Vice City by his old boss, Sonny Forelli. They were understandably nervous about his re-appearance in Liberty City, so a trip down south seemed like a good idea. But all does not go smoothly upon his arrival in the glamorous, hedonistic metropolis of Vice City. He's set up and is left with no money and no merchandise. Sonny wants his money back, but the biker gangs, Cuban gangsters, and corrupt politicians stand in his way. Most of Vice City seems to want Tommy dead. His only answer is to fight back and take over the city himself. From the decade of big hair, excess and pastel suits comes a story of one man's rise to the top of the criminal pile. Vice City is a huge urban sprawl ranging from the beach to the swamps and the glitz to the ghetto, and is the most varied, complete and alive digital city ever created. Combining non-linear gameplay with a character driven narrative, you arrive in a town brimming with delights and degradation and are given the opportunity to take it over as you choose. As a major gateway to South America and the Caribbean and attracting migrants, Vice City is brimming with diverse characters, so there's a friend for everyone. It is a sociable place and the new guy in town is sure to meet all manner of friendly people in the sunshine capital of America. Athletes, pop stars, real estate developers, politicians, trailer trash, everyone is moving to Vice City to find out what makes it the number one growth city in America. But, as Tommy quickly finds out, trust is still the rarest of commodities.
Release date NZ
January 28th, 2004
Game Platform
Brand
Developer
Rockstar
Publisher
Take 2
UPC
5026555240512
Product ID
1462005

Condition
Used - Acceptable
Well used but in working condition. Does not include original manuals and packaging.
Seller Details
Jennifer123 5 stars Ships from Whanganui

Comments: disc only in blank case, disc has lots of light scratches, my shipping fees are $4.50 non rural & $9 rural so please choose the correct one when buying, also both options are tracked & you will be sent the track informtaion, if you have special instructions for the courier please email me immediately after buying, check my other listings as i will be listing more games :)